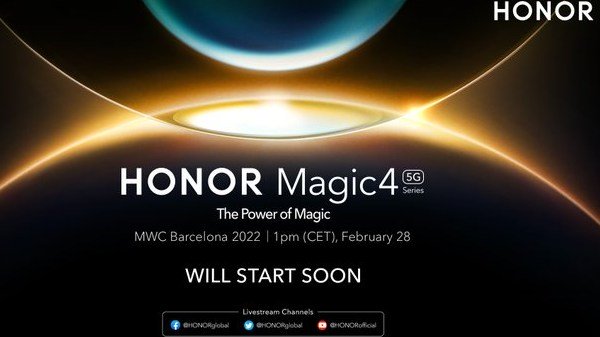 Technology giants across the globe are geared up to introduce some exciting new technologies and consumer products at the Mobile World Congress 2022, Barcelona. One such launch that caught our attention is the Honor Magic 4 smartphone series. The new flagship smartphone series by Honor primarily focuses on the camera and will be unveiled on February 28 at the big annual event. We are expecting Honor to launch at least three power-packed smartphones in the new smartphone series.

The launch event will be streamed live on the brand’s Youtube channel and official website. Although the upcoming Honor smartphone line-up won’t make it to the Indian market, it’s important to understand what the brand is up to in the flagship smartphone segment with its new series. Let’s find out.

Starting with the cameras, the Honor Magic 4 series handsets are expected to feature a 50MP primary sensor and a 50MP ultra-wide lens that will double up as a macro snapper. A telephoto lens will also be added to the setup to offer optical zoom and far-field digital zoom capabilities. As per rumors, the lower-end model in the series will flaunt a 16MP telephoto lens with up to 10x digital zoom support, whereas the Pro model might boast a 50MP telescope camera with 100x digital zoom support.

The fourth camera lens in the setup is expected to be a 50MP monochrome camera with a laser focusing system. The basic model in the series is rumored to feature a 16MP selfie camera while the Pro model can flaunt a dual 13MP + 3D depth-sensing selfie camera to offer a better selfie experience. All models will offer support for 4K video recording and are expected to come with excellent low-light photography capabilities.

These are some exciting camera specs that should deliver impressive still photography and videography results in real-time. It’s too bad that we won’t get to see Honor bringing the flagship series to the Indian market due to the lack of Google services.

Moving on, the Honor Magic 4 series handsets will flaunt 120Hz refresh rate AMOLED panels with 10-bit color depth support. The displays will also get HDR10+ and DCI-P3 color gamut support. The Pro model is expected to flaunt a 6.67-inch panel with a resolution of 2772 x 1344 pixels. The most premium model in the series- the Magic 4 Pro+ is rumored to boast a gigantic 6.78-inch screen with 3200 x 1440 pixels resolution.

The handsets will feature metal-glass construction with the Pro+ model boasting a premium ceramic design. The OLED panels will have gentle curves on two sides that should add a premium feel to the front fascia.

As far as the underlying hardware is concerned, the Honor Magic 4 series smartphones will most likely be powered by the Qualcomm Snapdragon 8 Gen 1 chipset. The recently launched iQOO 9 Pro also draws power from the same SoC and comes at a starting price of Rs. 64,990 in the Indian market. You can read more about the smartphone’s features and performance in our first impressions.

And while the Honor Magic 4 series won’t see any official launch in India, there are several important announcements and launches from MWC 2022 that you should know about. These include- Oppo Find X5, Poco X4 Pro, Realme GT 2 series, Samsung premium laptops, Realme’s 200W fast-charging technology, and a few others. We will keep bringing updates from MWC 2022. Stay tuned.